Over Shabbat I noticed a lot of common language between Devarim 7 (Vaetchanan-Ekev) and the end of "Sefer Habrit" in parshat Mishpatim. With the help of AlHaTorah's TanakhLab tool, I quickly traced out these parallels in a nice graphical format (hopefully I didn't miss any significant ones). Nearly every major idea in that paragraph of Mishpatim is repeated near-verbatim in Devarim 7 - though in a different order and with significant expansion.

Sefer Devarim is called in Chazal and arguably in its own text (17:18) by the name "Mishneh Torah", the repetition of the Torah. Indeed, many of the laws and some of the stories in the previous four books are repeated in Devarim. But it seems very rare for the actual TEXT of the earlier books to be repeated. Two examples of textual repetition are the Ten Commandments and the list of kosher species, but these are special cases: the Ten Commmandments were spoken directly by God and thus worth repeating verbatim, while you can't really list the kosher species in different language without prohibiting a different set of species. So Devarim 7 is the only extensive example I know of where there is actual, large-scale repetition.

(For best visibility, open the image in a new tab and example it there.) 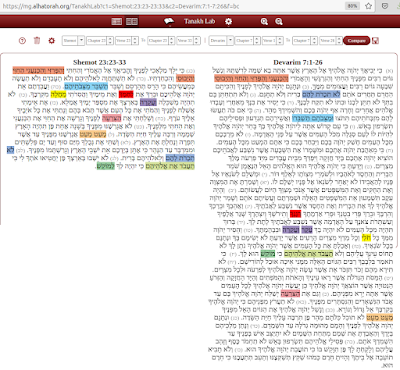 Posted by Beisrunner at 9:54 AM No comments: