In recent years there has been a debate, most publicly regarding R' Natan Slifkin's books, regarding what degree of scientific knowledge was possessed by the ancient Jewish sages. We see from the above quote that Chazal themselves did not think they possessed the perfect scientific knowledge that some people nowadays credit them with. Rebbi, the author of the mishna, rejected the scientific opinion of the Jewish sages (חכמי ישראל) because the scientific evidence seemed to be against it.

Why do the charedim insist on holding a position about Chazal that is against the above gemara, as well as against common sense?

Perhaps the answer is as follows. The "Chazal knew science" school is often associated with belief in "daas torah", or the infallibility of the greatest modern rabbis. It seems to me that saying Chazal erred about science is a threat to the belief in daas torah. If Chazal could err, then so can modern rabbis, who are clearly not as great as Chazal. And if modern rabbis can err, then statements of theirs may be rejected if not accompanied by a sufficiently persuasive justification. For the charedim, at least, that is unacceptable. Due to the perceived social need for daas torah, they are forced into a corner when it comes to discussing Chazal's knowledge as well.
Posted by Beisrunner at 10:45 PM 2 comments:

"Sometimes a small head gives the impression of a big yarmulke."
-DSF

(And when translated into Hebrew, this line has a extra twist [read the definition there, since the translation is rather inaccurate].)
Posted by Beisrunner at 1:35 PM 4 comments:

"When a Jew falls away from his faith, heaven forbid, there certainly remains some 'dot' of faith within him. The very fact that he feels pain at having fallen away from faith, and seeks good advice on how to restore and strengthen his faith, this in itself is an act of faith. For in the innermost parts of his heart, he truly believes in God and in the holy zaddikim. However, he does not feel this faith openly and fully, for to him faith is in the category of smallness and brokenness. That is why advice will be effective for him, because as soon as he is offered a good suggestion for the enhancement of his faith, he grabs hold of it as if it were a precious stone, for a bit of faith still exists deep within him, and he truly yearns to perfect and elevate his fallen, broken faith. Therefore he can gather several good bits from the broken fragments of his faith and thereby make it whole. This is the equivalent of 'the tablets and the broken remnants of the tablets lay together in the ark' (Brachot 8b). By the very fact that he sees his broken faith as corresponding to the category of the broken tablets, by this alone is it restored."
-R' Nachman of Breslov, Emet Vatzedek, Emunah #40, quoted in N. Lamm, "The religious thought of Hasidism: text and commentary", p. 93.

According to R' Nachman, someone with religious doubts is like an ark containing "broken" or "cracked" tablets from Sinai. This damaged faith is certainly is not as good as unblemished faith, but is still holy. And under the right circumstances, it may someday be mended into the "whole tablets" of complete faith once again. In fact, by simply recognizing that a person's partial faith is real and valuable even if not complete, it can become a sufficient basis for much of his religious life.

(This is certainly not the only passage in which R' Nachman speaks about religious doubt, but it was new to me...)
Posted by Beisrunner at 1:27 PM 1 comment:

Adam called the name of his wife Hava, for she was the mother of all the living. (Breishit 3:20)

Two observations on this.

1) One instinctively connects the name Hava (חוה) to the last word of the verse (חי). The problem with this is clear: Hava is not all living beings, she is simply the MOTHER of all living beings (well, the human ones). Shouldn't her name suggest that she's the mother, rather than implying that she's simply one of those living things herself?

For this reason, I think her name must come from a different source. It is a derivation not of חי, but of חיה. Haya is a similar-looking word with a different meaning (though clearly, they are related). As explained by the Rashbam on Breishit 18:10 (any guesses who I'm doing for shnaim mikra this year?) חיה refers to a woman who has recently given birth, similar to יולדת.

If so, then the verse is much more easily understood: “Adam called the name of his wife 'Birthing Mother', for she was the mother of all the living.”

The name Hava sounds a lot like a more familiar name – that of God, YKVK. By examining that name, we can understand Hava's as well.

The meaning of YKVK is best explained through another name of God – “Ehyeh Asher Ehyeh” (Shemot 3:14). I once heard a suggestion that this name is of the form “Bond, James Bond” and it proves that God's first name is Asher! But more seriously, Ibn Ezra (3:14) explains that “Ehyeh” is God's name (thus the introduction “Ehyeh sent me to you” that appears later in the verse), and “Asher Ehyeh” is an attached explanation (“Who is always existing/present*”). Of course, the Hebrew word Ehyeh is in the first person – appropriate for when God is talking about himself. When humans talk about God in the third person, the appropriate form would be Yihyeh. This is almost the same as the well-known name YKVK, and Rashbam and Hizkuni (3:15) argues that this is how the name YKVK was formed.

The only difference between Yihyeh and YKVK is that the yud in the middle is replaced with a vav. Thus the word no longer takes a grammatically correct form, and it is clear that it represents a unique name, rather than just being a verb. I suspect that God's name is not the only name with this yud-to-vav transformation. It seems to have also occurred in the formation of Hava's name, transforming it from the dictionary word חיה to the name חוה.

-----------
* For a full discussion of the verb "lihyot", its primary meaning of "appearance" rather than "being", and the implications regarding God's name and role in Tanach, see R' Yoel Bin Nun, "Active and existential being in the Bible: a linguistic interpretation of the name Hashem", Megadim 5:7-23. As an aside, I once heard or read R' Yaakov Medan discuss the implications of this meaning for our relationship with God: it is encouraging that we are guaranteed Divine presence in the world, but also more threatening, in the event that we sin.
Posted by Beisrunner at 7:59 PM No comments:

The OU is haredi? 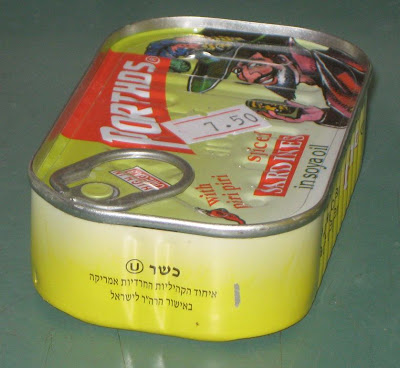 Purchased at the local makolet, with an "explanation" regarding the unfamiliar American hechsher...
Posted by Beisrunner at 1:47 PM 1 comment:

God contracted [tzimtzem] His pure light, as it were, just as a father diminishes [metzamtzem] his intelligence and prattles for the sake of his young son. All sorts of other childish qualities are generated in the father, who loves these childish qualities, so that the son may enjoy them, and this is a source of joy to him.

-The Maggid of Mezrich, "Maggid devarav leyaakov" no.1, quoted in N. Lamm, "The religious thought of Hasidism: text and commentary", p. 44.

R' Lamm says the "prattling" refers to prophetic revelation. I thought it meant the simple fact of existing in and experiencing a physical world.
Posted by Beisrunner at 1:33 PM No comments:

Last year in September I flew from the US to Israel. For some reason, the plane took an unusual flight path, which let me see a huge part of Israel from "above". Unable to photograph the view, I later recreated it in Google Earth. 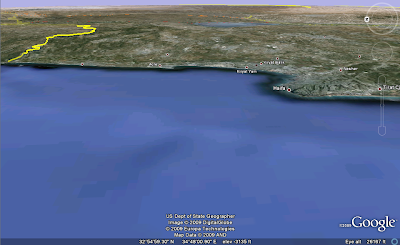 This experience reminded me of several verses (Devarim 34:1-4) in parshat Vezot Habracha:

Moshe went up from the plains of Moav to Mount Nevo, the top of the peak which is above Jericho, and Hashem showed him the whole land: the Gilead up to Dan; all of Naftali; the land of Efraim and Menashe; all the land of Yehudah, up to the Mediterranean Sea; the Negev; and the plain, the valley of Jericho, the city of palms, up to Tzoar. Hashem said to him: "This is the land I promised to Avraham Yitzchak and Yaakov saying 'To your offspring I shall give it'; I have shown it to your eye, but you shall not go there." 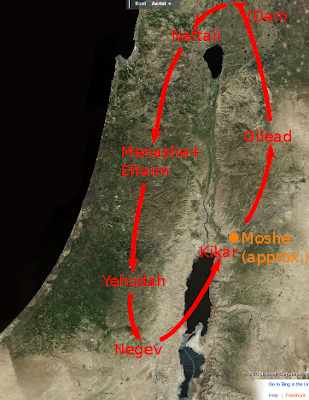 It is as if Moshe was scanning his eyes across the incredible view from Mount Nevo, trying to imprint it all into his mind in this last opportunity before he died.

It is the same thing I did from the airplane. The difference being that shortly afterwards, I landed in Israel and have been here ever since. It should be humbling to realize that while I was shown the land just like Moshe was, unlike Moshe I had the opportunity to enter it.

The flight also brought me to more philosophical thinking. From the airplane, I could see everything that happened in Israel, limited only by roofs and the focusing ability of my eyes. And a person on the ground, unless armed with modern weaponry, could not do anything to harm me. It seemed clear to me that the common idea of God being "above" us, in the “heavens”, is in large part a visualization of the ideas of omniscience and omnipotence.

Of course, there was one difference between my "omniscience", in the airplane, and God's. There are skyscrapers in Tel Aviv that when you see them from the ground, even from a distance, they never fail to impress you. From the plane, though, the same skyscrapers barely stood out from their surroundings. This seems like an inherent problem with such "omniscience": the more I saw, the less I was able to examine each thing I saw. God, being infinite, has no such limitation to his omniscience. God is no more impressed by the skyscrapers than I was, but having better "eyesight", is still capable of discerning all of their details.
Posted by Beisrunner at 1:23 PM No comments:

Someone blew that interview

While Tzvi asked several technical questions that I couldn't remember the answers to, I don't think I'm the one who blew this interview.
Posted by Beisrunner at 1:40 PM No comments: