The structure of Emet veEmunah

Ever since my childhood I have appreciated the Koren siddur's typesetting of Emet veYetziv: 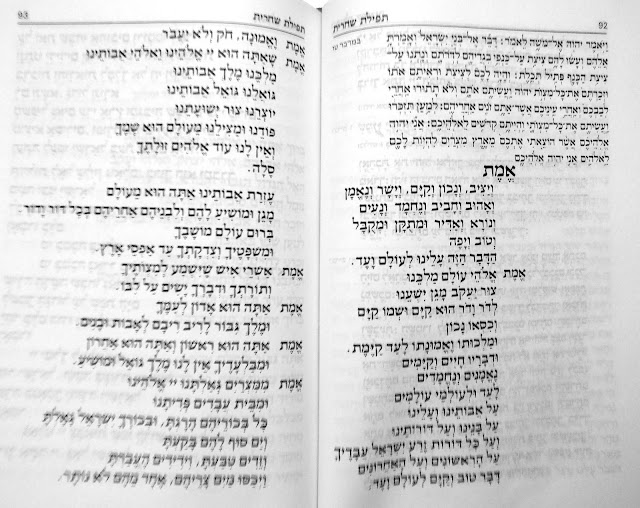 Without adding a word, it makes clear the structure of the blessing, in which the word "Emet" is repeated - just as we repeat it at the end of the Shema - so that all the various truths we assert in the blessing appear as expansions of the kabbalat ol machut shamayim of the shema.

It seems to me now that a somewhat similar structure exists in Emet veEmunah, the evening blessing which parallels Emet veYetziv. It goes as follows: 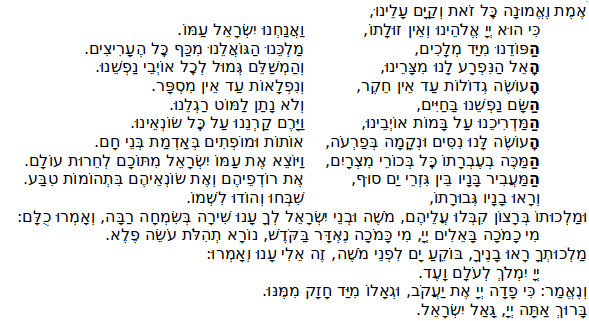 The core of the blessing consists of a series of ten very poetic lines. Each consists of two phrases which repeat the same theme (similar to the parallelism which is common in Biblical poetic verses). In many of the lines, there is a rhyme between the endings of the two phrases. For eight of these lines in a row, the first letter of the line is "heh", in reference to God.

Before these ten lines, we have a declaration that everything in the ten lines is true. After these ten lines, we quote the Biblical praises of God which are also in Emet veYetziv (my hypothesis is that these are here to satisfy the requirement of "arranging one's praise of God and only then praying" (Brachot 32a), with "prayer" meaning the Amidah.

One might ask why exactly there are ten of these lines. An interesting speculation is that they are meant to parallel the Ten Commandments, which begin "I am Hashem your God who took you out of the land of Egypt". Similarly here, there are ten statements, beginning with acceptance of God and continuing to describe exactly how we were taken out of Egypt.
Posted by Beisrunner at 8:39 AM