There is a Hebrew phrase which gets on my nerves these days: "Ein li koach". It translates to "I don't feel like" and generally precedes such unwanted tasks as doing homework, running errands, and so on, as you might expect.

But while the usage of "I don't feel like" and "Ein li koach" is identical, the meaning of the words is rather different. "I don't feel like" means that emotionally, I would prefer not to. It says nothing about what your emotions are, just what their practical consequences will be.

"Ein li koach" differs from this in that it specifies exactly what your emotion is: weakness. If you were strong, you would be willing to perform the activity. But you are weak, timid, and defeatist in your nature, so you are unable to find the enthusiasm to do something that's really worth doing. That is what the phrase literally means, and it's not a pretty meaning.

Now, this distinction between English and Hebrew could be trivial and misleading, if native speakers of a language learn such phrases as a whole and never think about how the words in the phrase fit together. Be that as it may, given the current political situation, whenever I hear the phrase "Ein li koach" it has a strong negative resonance to me.

For in the Israeli elections being held today, the choices are not so much between right-wing and left-wing as between serious political discussion and apathy. There are two parties - Labor and Likud - with well-defined political platforms, whose leaders have long resumes of both success and failure by which they can be judged. And there are two parties - Yisrael Beitenu and Kadima - with no discernable platform (beyond Yisrael Beitenu's visceral antagonism towards Arabs) nor any positive accomplishments in office (though Kadima has negative accomplishments).

You might expect that people would think about what policy is best for Israel, think about which party is best able to implement that policy, and vote according. Yet in the most recent polls, Yisrael Beitenu and Kadima were together expected to get just as many votes as Labor and Likud together. Why are so many people voting for parties that seem to have nothing to recommend themselves to anyone?

Undoubtedly some left-wingers see Kadima as a generally left-wing party, larger and thus better able to form a government coalition than Labor. And undoubtedly some right-wingers enjoy Yisrael Beitenu's rhetoric about disenfranchising Arabs. But I think these factors account for only a minority of Kadima and Yisrael Beitenu's support. More important is the fact that both parties have brand-new leaders, neither of whom was ever prime minister, and neither of whom has any significant record in their brief political careers. Experience showed that neither Netanyahu nor Barak could magically solve all the country's problems all at once. Apparently for many people, the jury is still out on whether Livni or perhaps Lieberman possess such superhuman abilities. Rather than seriously think about and confront the country's political issues, half the population would rather roll the dice and hope that the new leader will instantaneously make everything perfect. Half the country is saying "Ein li koach", and the other half will live with the consequences of that decision.

What are the likely consequences, seeing as these parties will likely not make everything perfect? Yisrael Beitenu's leader, ex-Soviet immigrant Avigdor Lieberman, apparently intends to establish Putin-style "democracy" in which all decisions will be made by trustworthy people like himself. And Kadima alternates between half-hearted attempts at left-wing and right-wing policy, failing each time and succeeding only in enriching itself in the process through bribes, money laundering, and theft from charities. Thankfully neither of these parties is projected to win the elections. But the likely result is an unstable and ineffective coalition, composed of disparate parties that agree only on the necessity of undermining each other.

Among the smaller parties, the situation is not necessarily any better, as you can see from the photographs below. Apparently the neighborhood charedim possess a list of every person of voting age in their community. Whenever someone shows up to vote, unofficial charedi election observers cross that person's name off the list. Whoever does not show up gets a personal visit from "headquarters" encouraging them to vote, for the correct party, of course. Luckily, this country still has secret balloting. 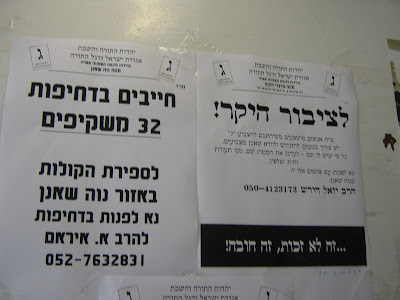 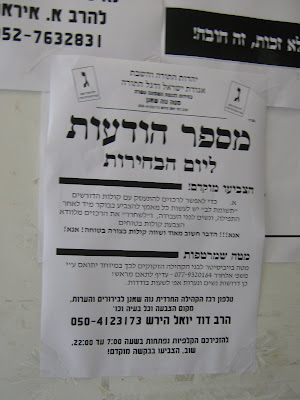 Posted by Beisrunner at 4:01 PM