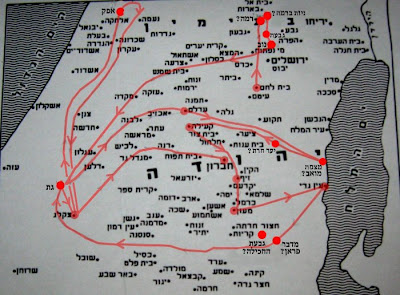 David's flight from Shaul, according to Sefer Shmuel (Alef chapter 19 - Bet chapter 2). David starts in Beit Lechem (his family home), and finishes in Hevron, after Shaul has died and he has become king.

Some speculative place identifications are based on shiurim from R' Yaakov Medan. Original map is from Koren Tanach.

Here is what David did in each place: